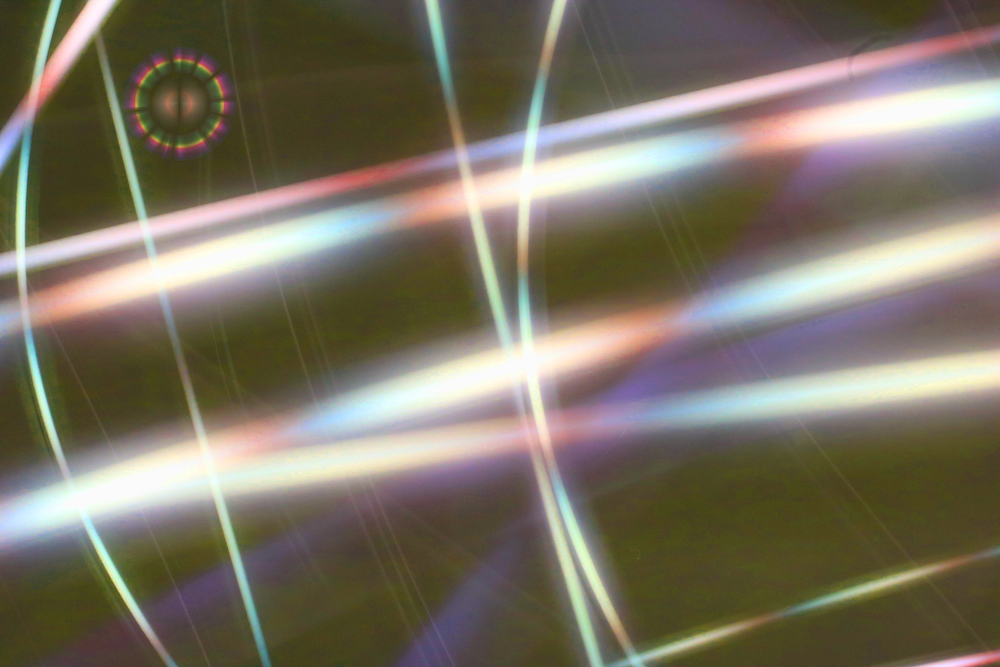 Linear regression is fitting a line to our data.

First, let's explore linear regression when we have only one variable (one feature; one independent variable).

Suppose that we have a table that describes house prices based on one feature which is the size of the house:

We call these examples the training examples, meaning that they are used to train a machine-learning model (in our case, linear regression) so we can use that model to predict the target variable for new data.

To do so, we need to calculate a function called the hypothesis (\(h_\theta(x)\)) that can be used to predict house price knowing its size. This function has the following form:

Note that this equation looks like the line equation (\(y=b+mx\)) where \(m\) is the slope of the line and \(b\) is the where the line intersects with the y axis.

Let's suppose that we have these data points: 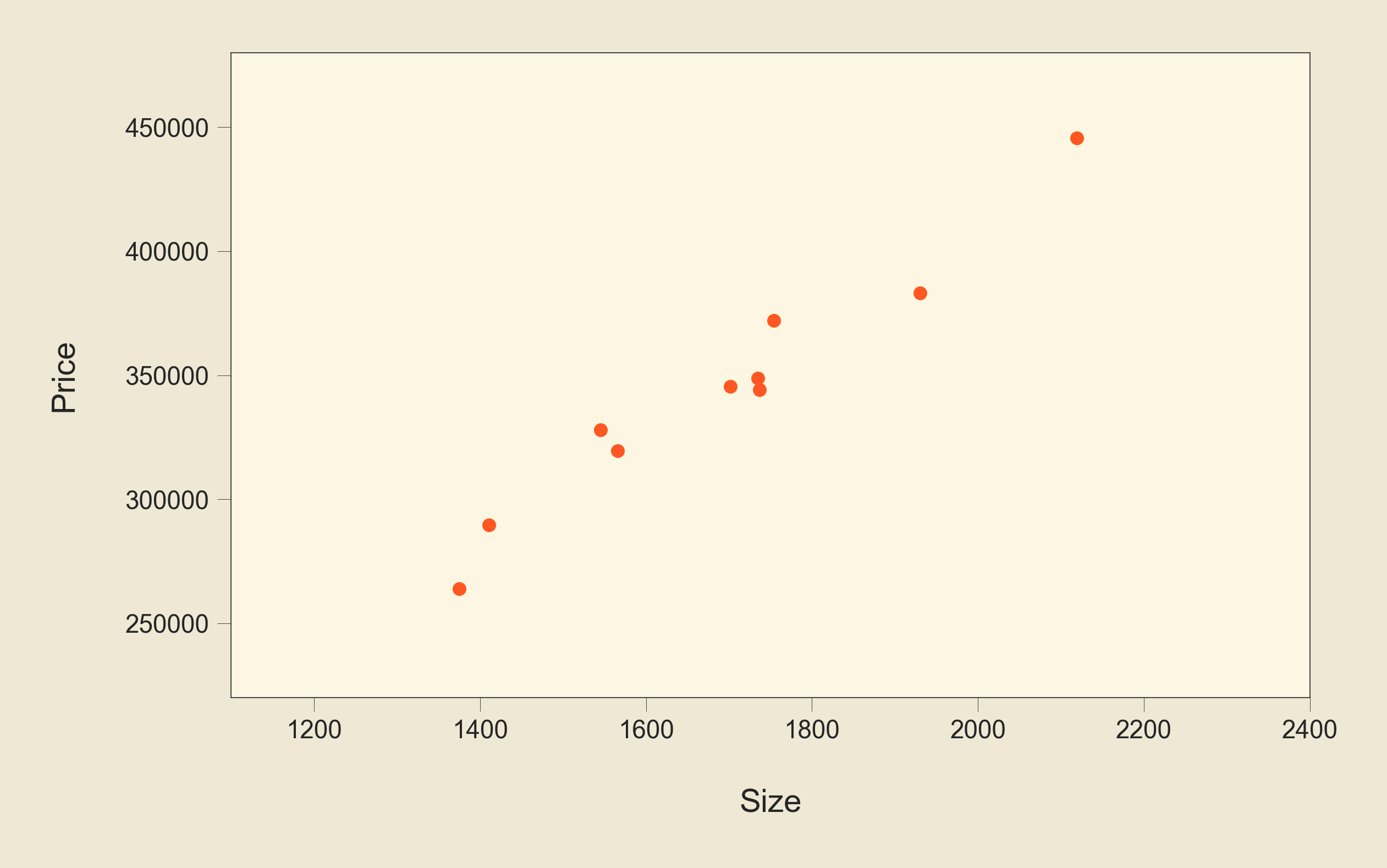 where each point represents a house, where the size of this house is on the x-axis and its price is on the y-axis.

We want to find a line that fit this data better than any other line. In other words, we want to find the optimal values for \(\theta_0\) and \(\theta_1\) in the following equation:

which represents a line as we said earlier. We can try many values for \(\theta_0\) and \(\theta_1\) until we reach a satisfactory results, but this is not a practically efficient way. Instead, we will use a function called the cost function with an algorithm called gradient descent to reach the optimal values for our two parameters.

The cost function is used to calculate the error in our model, to know, for given values of \(\theta_0\) and \(\theta_1\), how good is our hypothesis, how close are the predicted values to the actual values. The cost function for linear regression can have the following formula:

So this cost function calculates the difference between the predicted value and the actual value for all the training examples that we have. Our goal is to choose values for theta0 and theta1 that minimize the cost function.

For example, let's calculate the cost function value for the training examples in the table above, assuming that theta0=1 and theta1=2 (This is just random. We will see later how to get the optimal values for theta0 and theta1):

Now how to choose theta values? We do so using Gradient Descent algorithm, which is the repeat of:

:= means that we compute the right side and assign it to the left side. \(\alpha\) is the learning rate, it controls the step size of gradient descent. \(\frac{\partial}{\partial\theta_j}J(\theta)\) is the partial derivative of the cost function with respect to \(\theta_j\).

So gradient descent algorithm iterates and continues updating the parameters (thetas) until convergence, until the cost function value is not decreasing anymore. At that point, we can say that the values of thetas are optimal, meaning they produce the smallest cost (error) function value. This means that we can now use the equation:

So, the hypothesis function becomes:

but \(h_\theta(x)\) will make it different. Also, gradient descent becomes:

Let's say that we have these data points as our training data:

Now, we want to fit a line to this data so we can use it to predict the output value for new data. First let's see a bad example of such a line: 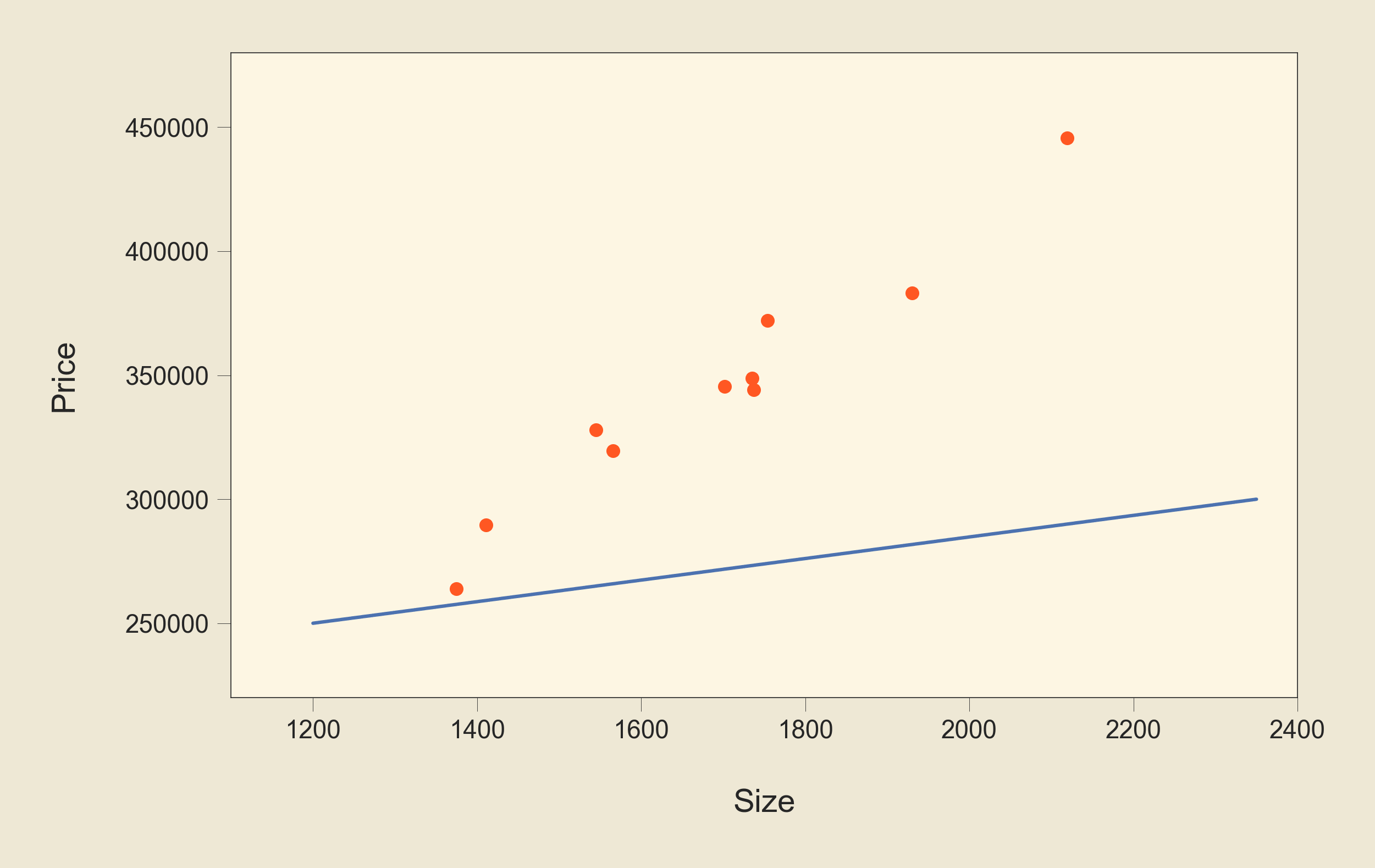 This line clearly is not the best fit. All points are on one of its sides. Let's see a better solution: 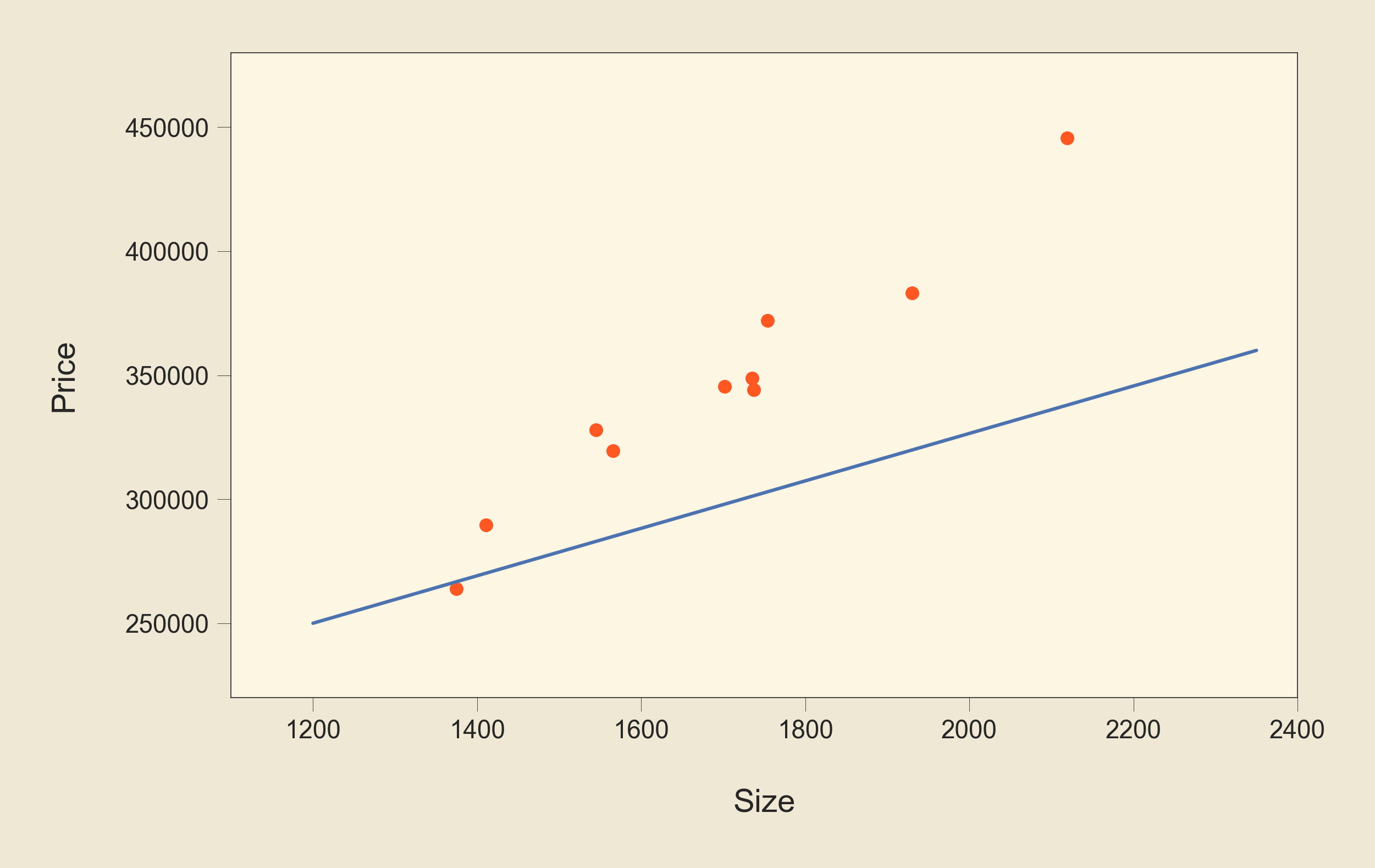 This one is better but still not good enough. Let's write a simple Python code using scikit-learn library, which is a great Python library that allows us to build many machine-learning models easily with a few lines of code:

Now that we have the optimal values for our parameters, let's plot the line using these values: 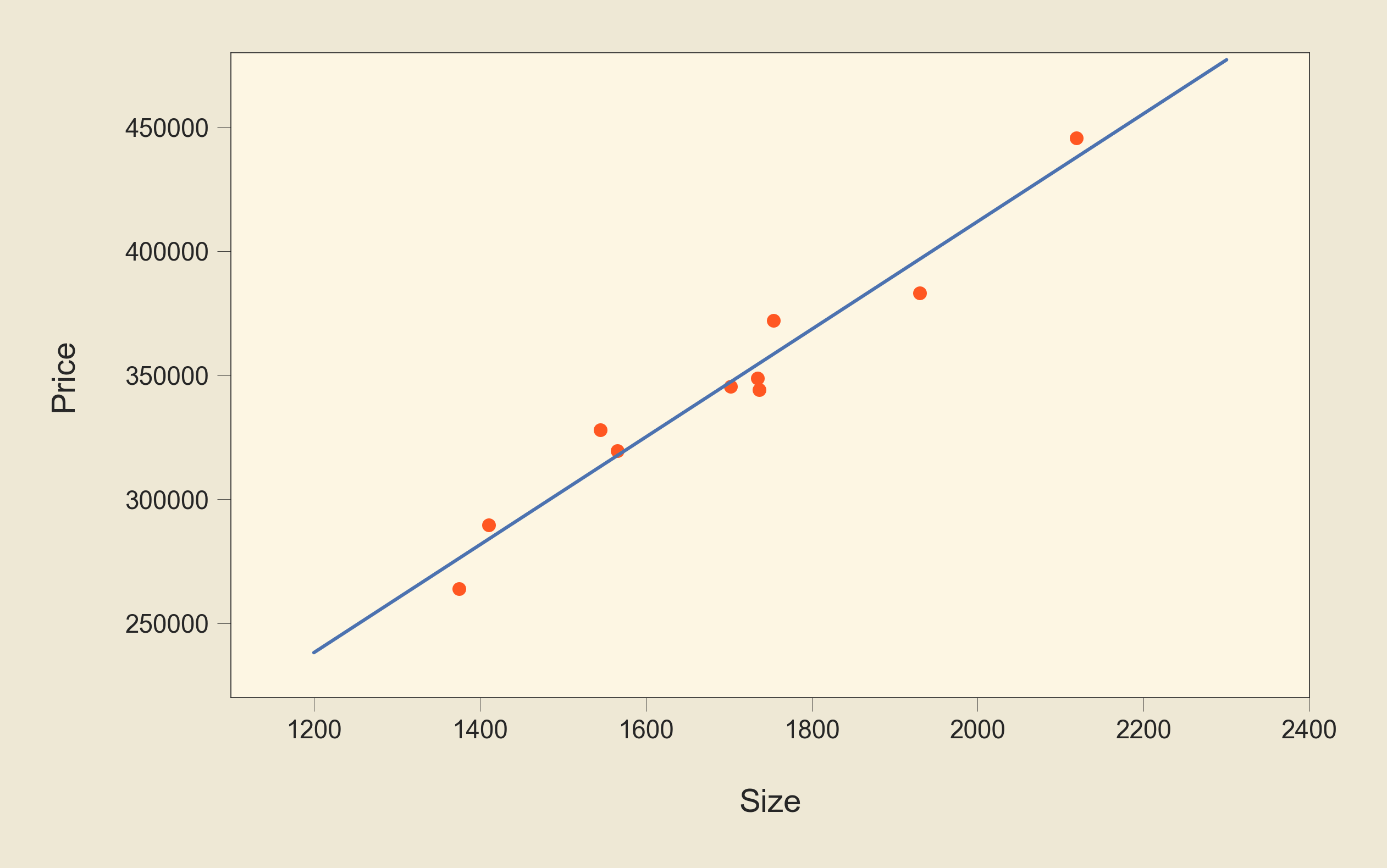 We can see that this line represents a better fit to the data than the previous two lines. And now, we can use the equation of this line that we talked about earlier:

to predict the output for new data. Let's have an example: suppose that we get a new data, which is the size of a house, and we want to predict its price using our model. If the size is 2030 m2. We can calculate the predicted values as follows:

So the predicted price is $418484.5. We can get the same value using the model that we built in Python:

This would be the new data point that we just predicted its target value; it is shown in yellow: 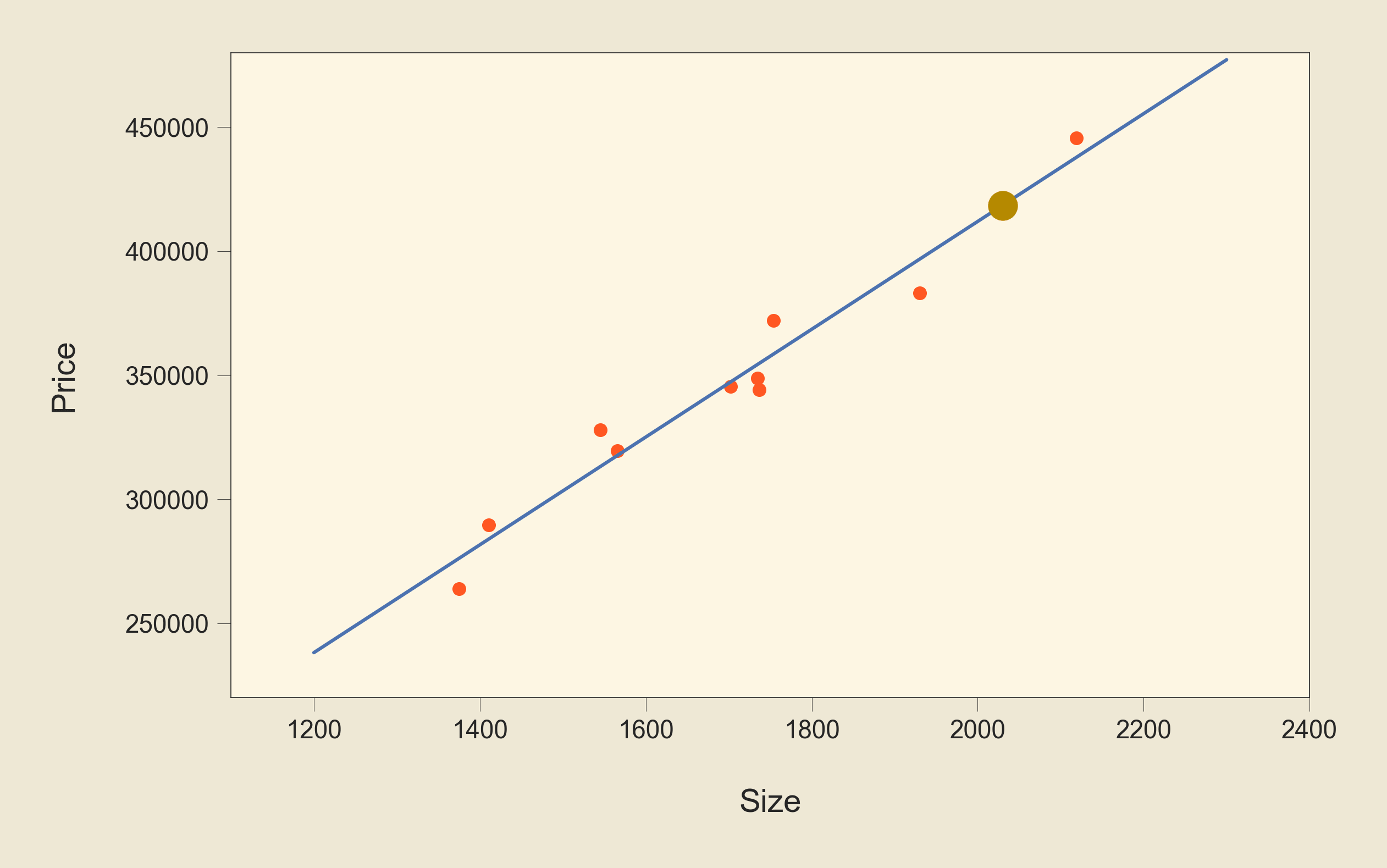 This post is highly influenced by Machine Learning course by Prof. Andrew Ng.