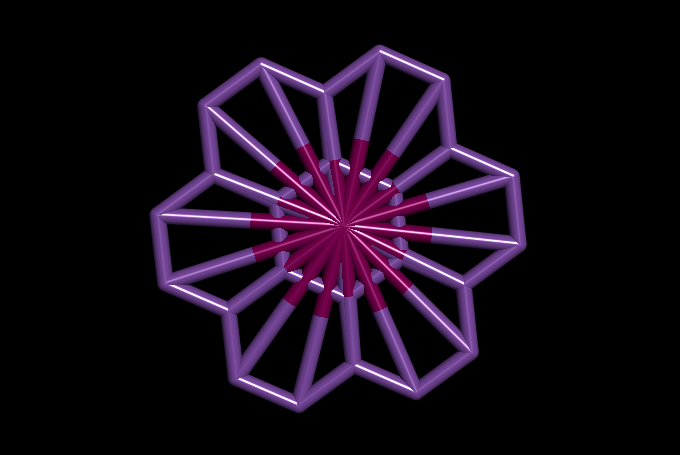 In this post, I will talk about a project I’ve done in order to get IBM Data Science Professional Certificate. In this project, the neighborhoods of two important cities in the world—New York City (NYC) and Toronto—were clustered into groups of similar items. One can use the results of this analysis to understand the similarities and differences between the two cities neighborhoods.

This post will explain the stages and results of this project broadly. For a more in-depth description, check the project report. The code used to perform this project is available as a Jupyter notebook.

To acquire data on venues and their categories, Foursquare API is used. Foursquare is one of the world largest sources of location and venue data. To retrieve the venues and their categories in a given neighborhood, the coordinates—the latitude and the longitude—of the neighborhood are sent in the API request. The API-request URL looks like the following:

where search indicates the API endpoint used, client_id and client_secret are credentials used to access the API service and are obtained when registering a Foursquare developer account, v indicates the API version to use, ll indicates the latitude and longitude of the desired location, radius is the maximum distance in meters between the specified location and the retrieved venues, and limit is used to limit the number of returned results if necessary.

The result of this data-acquisition-and-preparation stage is two tables (dataframes) that specify the neighborhoods and the venues of each of NYC and Toronto. Below is a part of the NYC table. In these tables, one neighborhood might take many rows depending on the number of retrieved venues for that neighborhood.

Several data-preparation techniques were used to arrive at this table. The details are all specified in the project report.

To get a better understanding of the venues data, we performed some exploratory analysis. In this analysis, we found the most common and the most widespread venue categories in NYC and Toronto.

Note: Before proceeding with exploratory data analysis and the subsequent steps, a data-preparation operation was performed: venues whose category is “Building”, “Office”, “Bus Line”, “Bus Station”, “Bus Stop”, or “Road” were excluded because they are not expected to add analytical value in this project.

The figures below shows the most common venue categories in NYC. 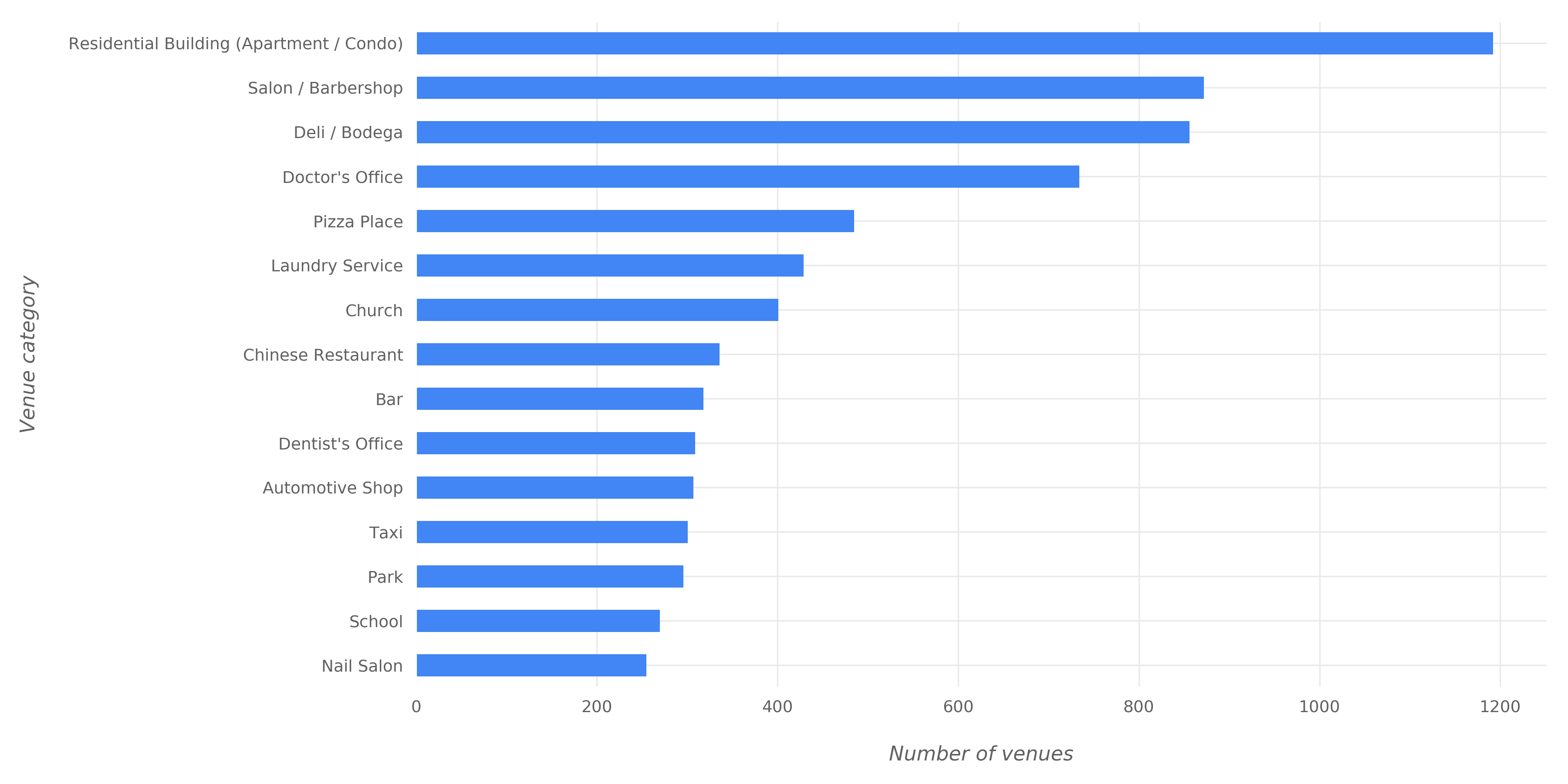 The figures below shows the most common venue categories in Toronto. 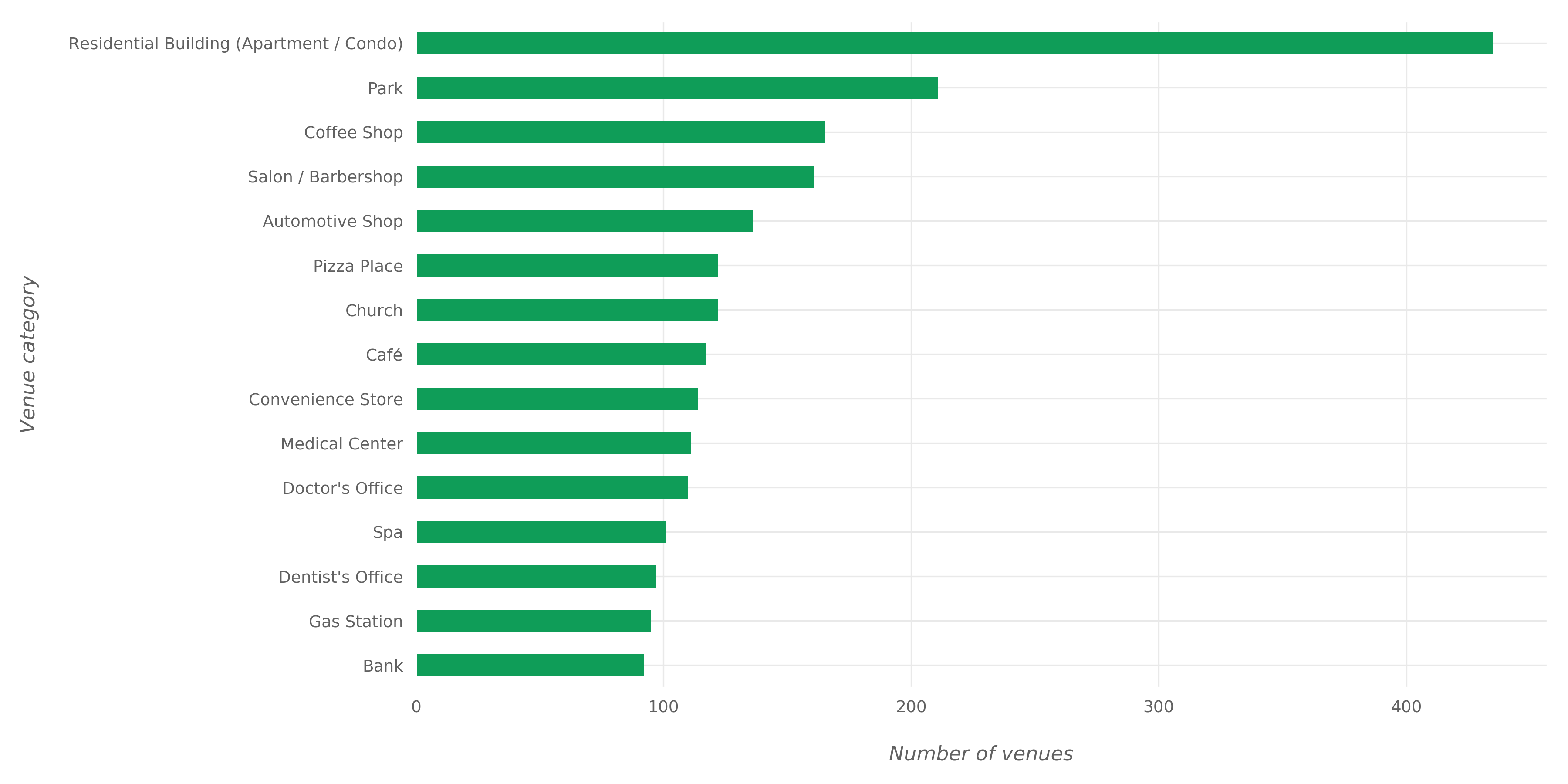 The figures below shows the most widespread venue categories in NYC. 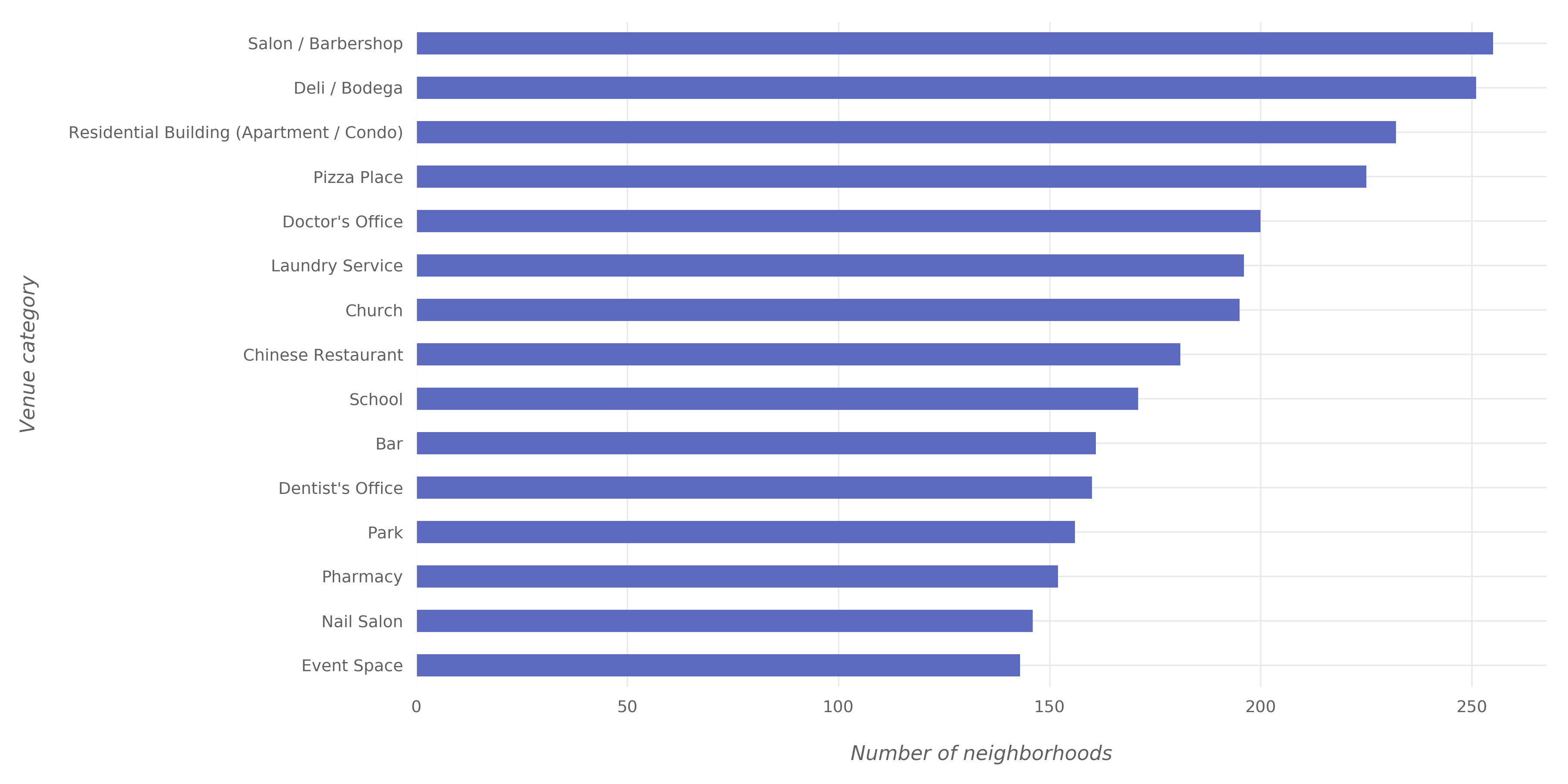 The figures below shows the most widespread venue categories in Toronto. 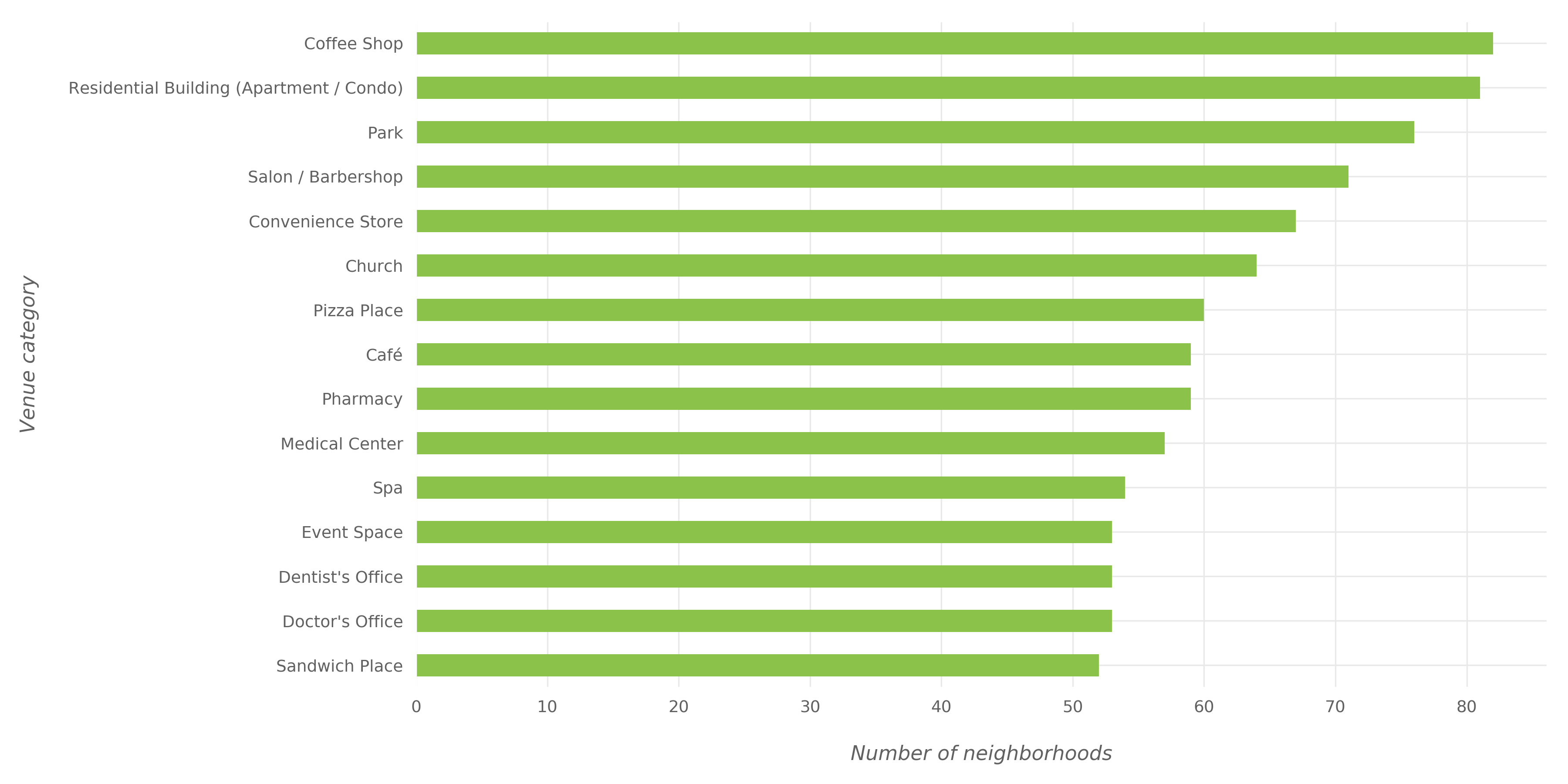 Since that we care most about the categories of the venues in the neighborhoods, one-hot encoding will be performed on the “Venue Category” field in the dataframe (table) shown above. A sample of the resulting dataframe of NYC is shown below.

The next step is aggregating the values for each neighborhood so that each neighborhood becomes represented by only one row. The aggregation will be done by grouping rows by neighborhood and by taking the mean of the frequency of occurrence of each category. So for example, if the Fieldston neighborhood has 15 venues (i.e. 15 rows in the dataframe shown above) and 4 of these venues are of the “Sandwich Place” category, then Fieldston row in the aggregated dataframe will have the value 4/15 = 0.27 for the “Sandwich Place” column. The figure below shows the aggregated dataframe of NYC.

Now, we have two aggregated dataframes, one for NYC and another for Toronto. The next step is combining these two dataframes together while adding a suffix to the names of the neighborhoods to still be able to distinguish between NYC neighborhoods and Toronto neighborhoods. The figure below shows a sample of the combined dataframe.

We added columns that show the most common venue categories in each neighborhood along with its cluster label.

The table below shows the number of neighborhoods in each cluster. 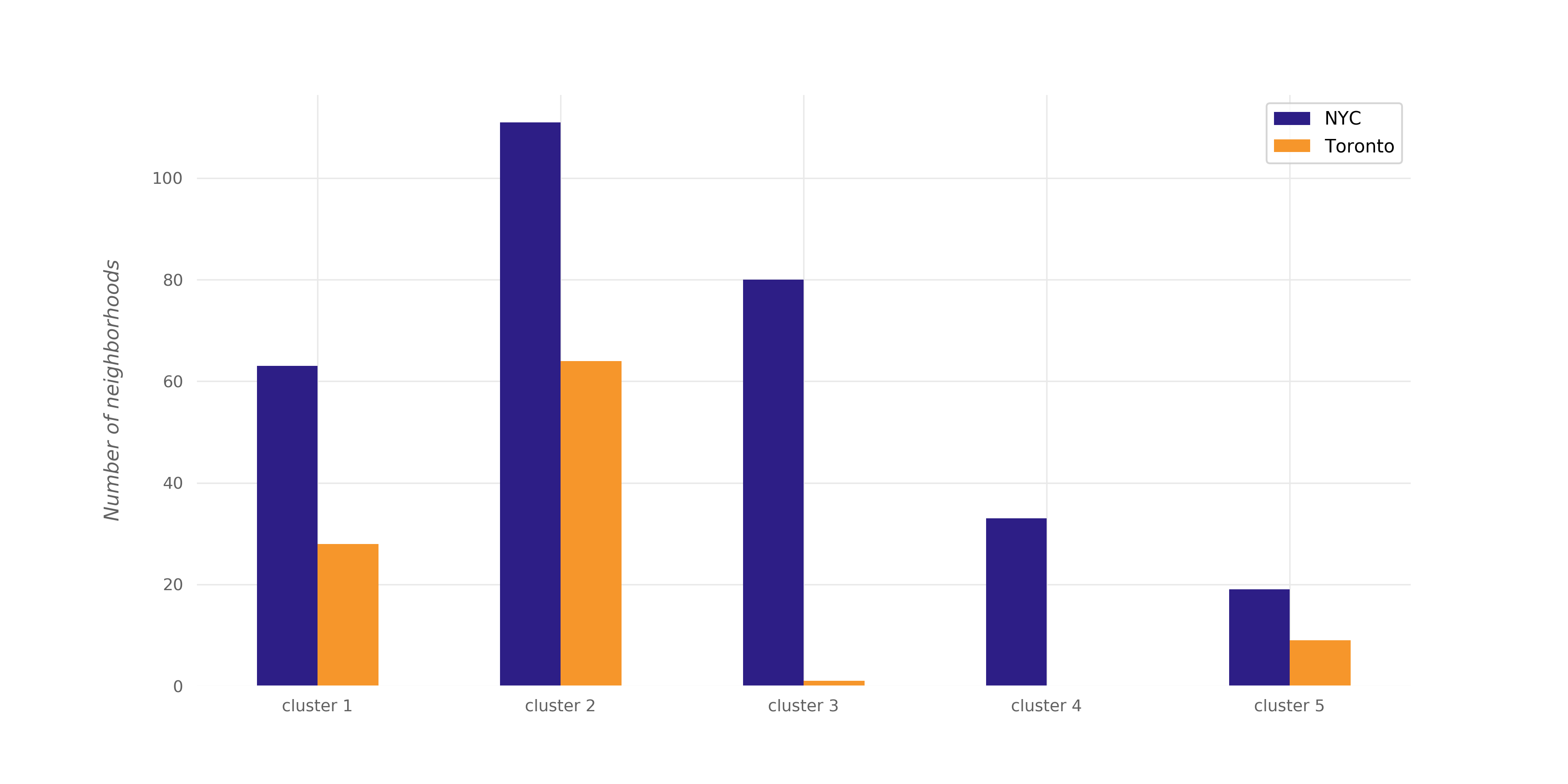 The tables below show the most common venue categories in the neighborhoods of each cluster with the percentage of venues for each category.

The differences between the clusters can be seen from the figure; each cluster distinguishably has different distribution of common venue categories than other clusters. Some of the observations that can be made are:

Other differences can also be observed.

To see the full detailed report of the analysis, click here, and to access the Jupyter notebook that contains all the code used in this project, click here.