In this document, I will briefly explain my way of solving the VSB Power Line Fault Detection competition. The metric used in that competition was Matthews correlation coefficient (MCC) between the predicted and the observed response. My final score was 0.58655; the best score was 0.71899 (a difference of 0.13244); the worst score was -0.28109.

EDA is the process that I started with and continued using throughout the competition to understand the data, to spot some useful patterns, and to choose proper parameters for some functions.

The image below shows the 3 phases of some signal: 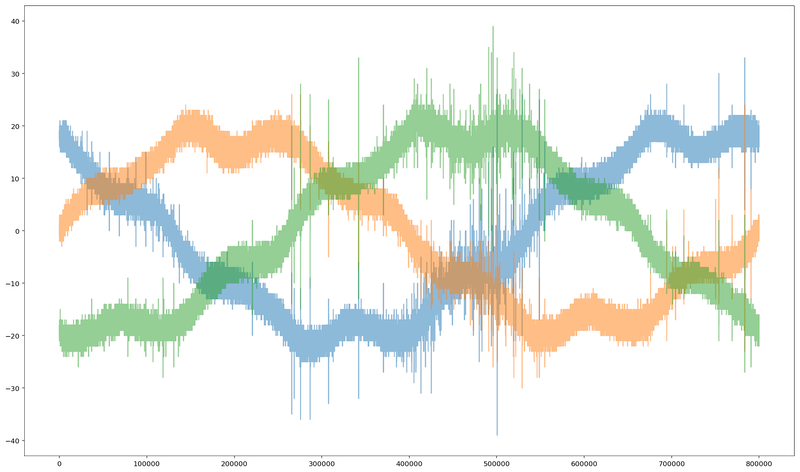 This is the most important part and the one that took most of the time. Because each of the signals has 800,000 readings, it's essential that we extract features from those readings in order to build a proper training and test datasets. Training a model with 800,000 features is not feasible with the machines that we have access to. In this part, for each of the training and test signals, I did the following:

All the operations described below are done after filtering the signals that contain a lot of noise as described above. To do so, we applied Scikit-image's wavelet denoising followed by Scipy's Butterworth filter. The image below shows the same signal before filtering (in orange) and after filtering (in blue). The overlapping is shown in dark red:

Find peaks inside a signal based on peak properties.

This function takes a one-dimensional array and finds all local maxima by simple comparison of neighbouring values. Optionally, a subset of these peaks can be selected by specifying conditions for a peak’s properties.

I performed the peak calculation process described above to calculate negative peaks. For example, to get the peaks whose height is bigger than 5 (positive peaks), you would write:

But if you want the corresponding negative peaks (peaks whose height is smaller than -5), you would write:

I used Numpy to calculate some statistics of the signals like the mean, standard deviation, minimum, maximum, skewness, 30th percentile, 70th percentile, etc.

For modeling, I used multiple classification models where each model predicts the probability of the existence of partial discharge in some signal, then the probabilities produced by all models are added and averaged (weighted average), and finally, a threshold value is used to convert the final probability to 0 or 1 (for example, if the probability is less than 0.51, then 1, else 0).

The code used is available in this Github repository. First final_v1 is run and the resulting dataframe is stored, then the same for final_v2, and finally final_sub is run which use the dataframes produced by the former two.